Home How to claim the Punjab State Lottery

How to claim the Punjab State Lottery

The PB State Lotteries are Indian national games that everybody can play, but with prizes far lower than the average international lottery. Even so, we decided to create a complete guide on how to claim the Punjab state lottery prizes and other hints. Read what we have to offer in terms of information, and perhaps you’ll also figure out how to win a jackpot.

What is the Punjab State Lottery?

Back in the year of 1968, the PB State Lotteries were established by the Punjab Government. Since then, its directorate has been conducting lottery games that genuinely pay Indian players who dare to bet on it. It has rules of its own, which we’ll explain together with the information on prizes.

How does it work?

There are no weekly or monthly draws in the Punjab State Lottery anymore, but the Bumper lottery draws are still working. Nowadays, it’s the Finance Department that decides the number of tickets that will be issued and sold. Also, there is no guarantee that those bumper draws will occur on the same day every single year.

Back when there were monthly draws, the winner could get up to 20,000,000 Rs, whilst the weekly prize would be a maximum of 500,000 Rs. Now, the bumper PB lotteries available are the following:

How to claim the Punjab State Lottery prize?

In case you purchase tickets from the Punjab lottery bumper draws and get the right numbers, you are a lucky person. However, you need to know how to claim the Punjab state lottery prize within the limited claiming period. Differently from what happens in the international lotteries such as Mega Millions, it’s a complicated process.

First, the claimer must print and fill a claim form, besides documents that will prove the identity. Now, imagine the time spent and the possibility of things that might go wrong. Fortunately, international lottery games don’t have that issue, and the money goes directly to your bank account in India. 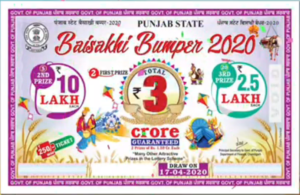 What is the best bumper draw in Punjab?

Now that you are aware of the trouble of requesting your deserved prizes, maybe you still want to keep playing inside India. If that’s the case and you selected the Punjab lottery, you should pick one of the bumper draws.

What other bumpers are there in Punjab State Lottery?

We presented the three best bumpers happening within the first months of a year in the Punjab lottery. Now, let’s take a look at what other draws you might take a chance. Don’t forget to compare the prizes and tickets with the international games playable from India we recommend.

Now you are familiar with all six bumper draws offered by the Punjab lottery, and that’s great! However, we can’t help but mention that games such as EuroMillions and Powerball offer higher chances. You may check our analysis on them now or wait until you finish with this article.

How to win the Punjab lottery?

You already know how to claim the Punjab state lottery prize, but you need to win first. We saw that most of the prizes are currently varying between 1.5 – 2 Crore. Nevertheless, those are the jackpot prizes given to 1 or a maximum of 2 people – when there are two series of tickets.

Therefore, the only way to win the Punjab lottery is by purchasing lucky tickets. The smaller prizes vary from 20 Lakh to just a few Rs, maybe enough to buy one ticket in the next draw.

If you want better odds, we suggest taking a look at international lotteries. We selected a wide variety of games that pay Indian players, and we indicate how to win on them. If you want more options than the bumpers the Punjab state lottery can offer, feel free to check them.